In bringing Lionhead back to our own patch we were confident about how things would go. We thought that pulling them out to the sticks and putting them on a pitch that could hardly be described as flat might swing the advantage in our favour, but things don’t always go to plan.

In fact, it was pretty much an exact copy of the last outing. Once again, we had two teams and they had two teams and from the four matches that ensued our results looked a bit like this: P4 W1 D1 L2. Identical to the last meeting between the studios, just with a few more goals to each side.

Up until the last game, though, it was all going well. For my team, at least.

I watched as our B-team lost 3-1 to their A-team in the first match. However, despite the scoreline our Bs were unlucky and if they had converted any of the numerous chances they squandered or hit the woodwork with it may have been a different story.

After that we were facing their B-team and as per usual we started badly. Bad even by our standards as we were 2-0 down within three minutes. To say we were shell-shocked was an understatement as they nipped in between us both times to score. Luckily we pulled one back before half-time and a spectacular, looping, Matty Taylor-effortfrom our centre-back sealed a draw.

No rest for the wicked, though, and we were straight back on to face their A-team. This time we took an early lead before being pinned back to go into the break 1-1. Then, in the second half, George took matters into his own hands and completed a hat-trick with some lovely finishing and some very nice pass-and-move play from the team which saw us through 4-1 winners.

So after three games it was a win and a draw each. Here it began to slide very rapidly down hill.

At half-time in the final game our B-team were trailing 1-0 to theirs, but our goalkeeper had taken a knock to his hand and was doubtful for the final half. In hindsight, I somewhat foolishly agreed to take over and what followed was a defensive shambles that left me livid.

It may be ok to push on to try and get an equaliser but when I am left to deal with one-on-one after one-on-one it can try the patience of even the most saintly keeper. I may not have had the best of games last night but I don’t think the the final, embarassing 5-1 scoreline can be laid at my feet considering the circumstances.

With this in mind, one of the big positives to come from last night was the fact that this time Lionhead didn’t bring their film crew with them so we can’t be edited to look even worse than we were. Although I don’t think that would have been possible with the last game.

To leave on a high note, there is talk of trying to put together a Microsoft wide football tournament for us to show our “skills” off at. The best thing about it, though, is the location where it might be… it may be under a large arch somewhere.

Oh, it’s on! Lionhead are currently heading up the M1 in our general direction for a rematch. More later.

I get back from my jaunt to California to find Lionhead spreading some interesting tales about Rare’s footballing prowess! In the second of their video diaries they use some clever editing to make it seem as though they rolled us over back in May but I seem to remember things differently (and rather wordily, I now realise and apologise for), at least for our team, anyway; the least said about our B-team the better.

True, I may be bitter and twisted that the highlight reel showed the only two goals I conceded during our matches, but the truth must be known – our A-team was undefeated!

Edit: Here’s the “highlights” that I’ve snipped from their diary.

The football scene at Rare is robust one; there’s the Tuesday evening kick-around, the Wednesday night league and during the summer a match post-work on Thursdays here at our very own Manor Park, which itself even sounds like a football stadium. To keep this level of football up we have a large pool of players to chose from and just as many understanding other-halves that allow their men to go out and kick pig’s bladders around several nights a week.

We’re not the only development house in MGS with such commitment, though. When our Head of IT went down to Lionhead, Guilford, a while back, he found an equally thriving sporting scene and it seemed only logical to pit their teams against ours in Rare’s first inter-dev match in many a year.

We felt like an authentic away-day team driving down to Guildford yesterday afternoon; despite there only being just over a dozen of us, we were all sat upon a massive 60 seat coach, like the ones you see driving teams to cup finals, talking team tactics and deciding which of my defenders I was going to shout at most during the match. It was just as well we were given nice, plush transport, too, as it was a three-hour trip down into the centre of the M25 and when we finally emerged off the coach we couldn’t wait to get started.

It turns out Lionhead are used to this sort of thing as they already had a predetermined ‘A’ and ‘B’ 7-a-side team ready to go. We, who usually pick the teams based on who is available on a certain night, opted for a slightly different approach as our manager-for-the-day split us up into “offensive” and “defensive” sevens, which made our American team members feel right at home. Due to my goalkeeping habits, I obviously went on the defensive team, which suited me just fine as I always feel more confident knowing that there are some defensively minded people willing to stop back and help cover the danger. 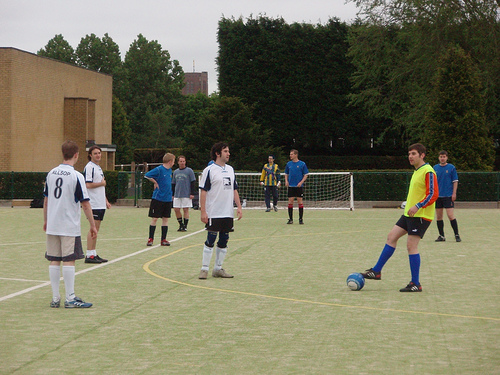 And so it began. Badly.

In our first game we conceded within five-minutes as a break on their left saw them power into the box and unleash a shot. I managed to get hands to it but gallingly it wasn’t enough as it simply diverted the effort onto the post and eventually dribbled over the line on the rebound. They were well organised and we were sure we were playing their A-team; every time they pushed forward they looked dangerous and it was only due to the combined efforts of the defence and I that we managed to keep their best efforts out.

Their shape meant we mainly had to play on the counter, and although chances were few we managed to scramble a goal two-thirds of the way through the game to force the equaliser. I would love to provide a colourful and scintillating description of it but my view was horribly obscured. I’m assured it was scrappy, though, as our Russian striker at close-range managed to work the ball through outstretched limbs into the corner of the net.

With a draw under our belt, we moved on to our second game of the evening against their other team, who had just dispatched our offensive team (possibly in more ways than one) 3-0. Buoyed by the confidence gained by earning a draw, yet slightly apprehensive about the skills of this new team, we took the turf with Lionhead’s blog producers capturing us on camera for posterity and possibly a video diary. 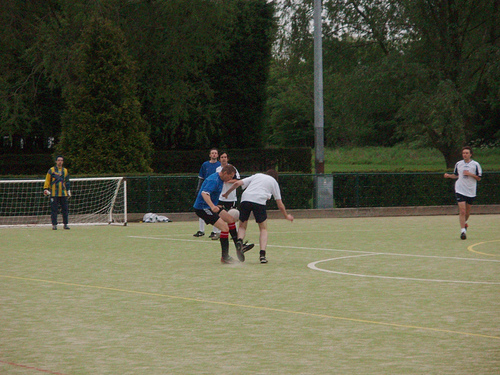 And so it began. Splendidly.

This time it was Rare that scored early on, with a lovely flowing set of dissecting passes resulting in forced error and an own-goal. Not quite the finish the move deserved, but at times you’ll take anything.

We doubled our lead shortly after as a corner was swung in and our Russian front-man was again there to convert the chance. This time, though, it was with a majestic, salmon-like leap into the air to then head the ball past the despairing dive of their keeper and into the bottom right-hand corner. A quality finish, no matter what level you play at.

After that it was end-to-end stuff with our defence again severely tested, but in this match we asked some questions of the opposition’s too. Toward the end a defensive error let them run on through to grab a consolation goal, but apart from that minor blip our defence stood firm and we walked away with a solid 2-1 victory. Regrettably, the same cannot be said for Rare’s other outfit as they again went down to a 3-0 defeat: it just goes to show what a solid defence can do for a team.

After the final whistle both teams retreated to the bar and began to mingle with their on-pitch opponents, Lionhead obviously the happier having won two of the four games and only losing one of the others. You can’t fault their hospitality, though, because by the time we reached the bar a tab had been started and beer was being thrust into our hands. Very gracious winners.

With the return leg somewhere soon in the offing, some trading of players between teams may have to be done to balance things out, but this could be the start of something interesting. There is already talk of friendlies with Liverpool’s Bizarre Creations and other more local studios, not to mention a nationwide developer’s tournament that someone’s caught wind of. Before long we might even be able to get the bus branded with a Rare FC logo, but I think we’re getting ahead of ourselves; I’ll just settle for a new goalkeeping jersey.

EDIT: there are now some photos of the day.