A couple of weeks ago I treated myself to a new video camera, a lovely Sony CX410.With some of the bits and pieces we’ve done for 7outof10 over the last year I looked at it as a way of expanding my repertoire. I enjoy doing the Let’s Play captures and thought I could add some “to camera” pieces to flesh them out, plus our excursions to Gamescom and Rezzed helped me discover an enjoyment in interviewing and editing. It was my post-Crunch treat to give me something to look forward to.

So, with that all said, why not christen the new toy with a baking video.

When I focused on trying to shoot something game related I was a bit overwhelmed. There was too much choice and, indeed, setup.

Inspired by Amy’s video of me baking bread a few weeks ago though I knew what was needed and at least could set about trying out my new hardware with little worry about the process. I’d seen her shoot it and could just mimic the process. Instead I could just focus – pun intended – on seeing what the CX410 could do.

As a first stab I’m happy with it. There are obvious things to work on, not least the audio, but it’s proven I made a good choice when it came to the camera.

How to make bread

Over Christmas our lovely friend Amy from She Cooks, She Eats came up from London to visit. She runs a lovely food blog and very kindly ask me to make some bread.

If I’m being honest, it wasn’t the finest loaf I’ve produced. It was a little wet after the initial mixing and although it came out ok in the end it was a little touch and go at one point.

I’ll put it down to filming nerves. 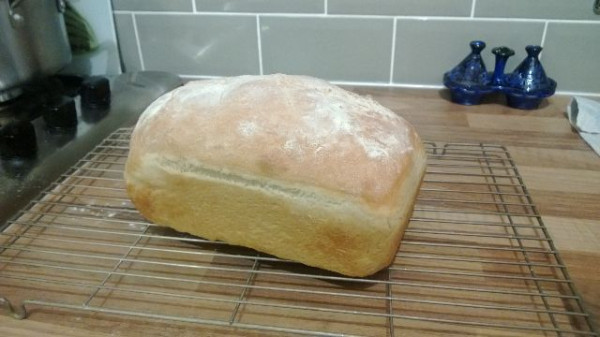 If there’s one thing in this world I love, it’s bread. Well, in fairness, it’s Lego, football, gaming, rabbits and bread. But bread features really quite highly.

Last year I tried to take this passion a little further. I put to one side the Kenwood breakmaker and started making break from scratch. For a while I experimented with some basic white loaves but after a bad run of poorly risen, deflating, or denser than dense creations I decided to stop trying to be the next Paul Hollywood. However, after that hiatus I have returned. Inspired jointly by a couple of choice Christmas gifts and the Great British Bakeoff I’m going to start down that road once more.

Many people have said to me how they find breakmaking theraputic and I’m beginning to see that. First time round I tried to use a mixer a little too much and so the whole process felt a little bit too mechanical, merely going through the motions to get to the bread stage. This time I’m using my hands a lot more. I’m still taking advantage of Ali’s Kenwood mixer to get that initial mix going but I’m learning to enjoy kneading. The tactile sensation of hands on bread makes me feel far more engaged in the process and is ultimately quite calming.

It’s only been two weeks but I’m already enthused with what I’ve been able to do: a basic white that kept us going in sandwiches all week, and a tasty stilton and cranberry loaf that went against my initial expectations and proved a nifty flavour combination. Where this will stop, I don’t know, but as long as I get an 8-way plait going to dazzle Mr Hollywood then I’ll be happy.