Are Gamerscore Blog, one of Microsoft’s many official Xbox blogs, a little too eager with their April Fooling or is this actually a public service announcement that’s very badly timed?

When the Government launched a study into video games back in October, I must say that I was worried about the outcome. With Labour’s own Keith Vaz only last month telling us all about the “virtual rape” that can occur in such things, you could be forgiven for thinking that certain quarters were out to get the industry, but the report which emerged today seems to be very positive and indeed sensible.

There are no cries for the banning of violent titles simply because little Timmy’s mum is too stupid to realise what the large “18” on the front of the box labelled Manhunt means, instead there is a call for a unified classification system – combining the BBFC and PEGI system that currently operate side by side.

Whilst I don’t think that either of the these systems are confusing, I can see why parents who are suddenly presented with a box by their offspring could be confused. The BBFC variant maybe familiar too them but the vast range of symbols that can be seen on PEGI games are not always that straight forward.

To confuse things further, I also hear of kids telling their parents that the age on the box actually means the recommended skill level rather than a restriction.

Given all of that, their recommendation to increase parent understanding of whatever ratings are forthcoming are welcome. Having also worked in retail, I know that there are reasonably adequate laws surrounding this area but so often parents either used to waive advice or simply didn’t understand.

I’ve never been against the classification of games, I don’t think many people have, but a few have often thought that it may lead to more censorship as their titles are more highly scrutinised. That I doubt, a higher rating for your game, maybe, but given the BBFC’s history on banning games I don’t think two in ten-years could be counted as extreme. Ultimately, if it can help drag the reputation of this form of entertainment up then I’m all for it.

You can find the full report on the Byron Review website.

I hope that everyone is suitably stuffed from their Easter extravaganza. Having a pet that is heavily associated with the time of year brings with it certain themed presents and so I am still working my way through a batch of chocolate rabbits that relatives have bestowed upon me.

The prize eggs of the year, even if I do say so myself, are surely the ones that I gave out to my sister and her boyfriend: Super Mario Kinder Eggs. 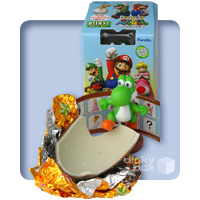 If I remember the adverts correctly, that’s three gifts in one: chocolate, a toy and a surprise! I was always dubious how it was three because the surprise for me was always if it wasn’t a shoddy toy.

Anyway, these are some quality sculpts and between us we managed three Warios, two Gombas, a Lakita, a DK and a Luigi. We have the bug, it’s just a shame they’re now sold out.

It’s a Bank Holiday, and I’m in work. Yes, it’s another dramatic opening statement that is supposed to show you how hard I currently have it, but I don’t expect sympathy as there is a ready supply of Cadbury’s Cream Eggs in our kitchen and their sugary goodness is keeping me happy.

However, their chocolate covered goo is masking one disappointment, as I discovered this weekend that my first comic book shop has now closed its doors. On a trip down to Bristol I found that the Travelling Man where I bought Tommysaurus Rex, my first ever graphical novel, is no more.

Admitedly it’s been less than a handful of years since I started reading books that had more artwork than words but the staff there were always helpful and always had a suggestion or two for what I should try next. It’s sad to see that the Forbidden Planet that opened not two streets away has forced out this indie.

Luckily Ali works very close to another in the form of Astral Gypsy, and whilst I’m not against shopping in the chains, I’m always one for liking the more personal touch that the indies, in any genre, can give you.

Hold on, what’s this? A new Banjo Kazooie website? Well I’ll be.

I’m obviously in no position to speculate but I know Rare Elite are.

They call it an “outfit”

It happens to most men: at a certain time in life you’re allowed a midlife crisis and my dad, like many in his position, decided that for his he was going to buy a motorbike. Luckily for everyone around him, rather than opting for a shiny super bike he went for one with stabilisers: he bought a motorbike and sidecar. 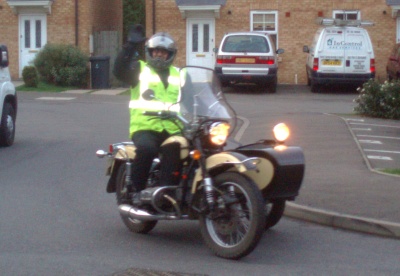 Personally, I think it’s fantastic, especially as it’s one of those vehicles that just exudes character with its 1940’s design and colours.

It’s going to be a while before I’m brave enough to ask for a lift in his “outfit” but if you see this man pootling down a road near you be sure to give him a beep.

Despite coming out last November, it has taken me this long to plug Call of Duty 4 in and get online to experience the game that is keeping Halo 3 off of the top spot of Xbox Live’s Most Played chart.

I was too engrossed in being a Spartan to switch to this more grounded combat but having seen my office-mate Errrm constantly play CoD at lunchtime, I thought now was the time. 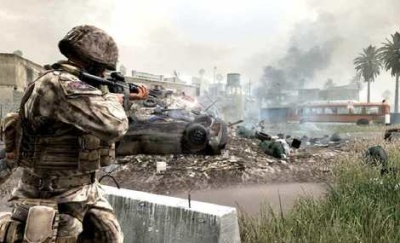 At first I hated it. As is always the way when you switch from nice comfortable surroundings to somewhere a bit foreign, everything is out of place and just wrong: sound effects seemed as though they had no origin; you died every twenty seconds; maps were disorientating; and all the weapons seemed unresponsive.

The problem was obviously that I was bringing my adventurous Halo style of play into a game that required a bit more thinking before throwing yourself into harm’s way. Two bullets could easily send you to the respawn screen and once I had accepted that, things started to get better.

A good marksman will be able to pick you off very quickly in the open so camouflage and cover are key. You’ll never find a fire fight out in the open (or at least, one that lasts very long) and so it hearkens back to my Rainbow Six days of caution and constantly edging around looking down your sights.

Behind the main game you’ll also find and RPG. Not Rocket Propelled Grenade, as it could easily have been, but a Role Playing Game, because for every good thing you do, i.e. assists, kills, recon activation, you gain XP which will allow you to gain promotion through the ranks, unlocking guns and abilities as you go.

It feels slightly cheap that the better players will have the better guns when you first begin but, as with all XP games, even those less-than-average players will be able to grind their way to the top to gain some loot.

Some of the abilities just feel cheesy, like the ability to drop a live grenade just before you step into the light, but most allow you to balance of your stopping power with your own sturdiness.

Unfortunately, there are a couple too many “cheesy” ways to get kills; given a good enough kill streak players can actually call in attack helicopters and air strikes. It is certainly something to reward players but I can’t decide whether this is madness or genius on behalf of the designers. Sure it mixes a standard shooter up but the majority of the time it just feels cheap as you die at the hands of an unseen enemy.

Having said that, CoD does a lot more right than it does wrong. Whilst I didn’t think its more considered pace would be my cup of tea, the added extras of unlockables and the sheer challenge of adapting to the environement have won me over.

This may not replace my Halo, but it sure is a good compliment to it.

Team building exercises are great. Whether you’re trying to shoot your workmates in the face with a paintball or ram them off the road in a kart, they really help bond a group.

Yesterday we had quite an unexpected one in the form of a flash mob as just after lunch our Sound Engineer summoned us to the recording studio because he needed a batch of crowd noises and we were just the rabble to help him out. Cue fifteen minutes or clapping, ohs, ahs and the odd inoffensive yell (we do try for E ratings, after all).

The rounds of applause caused him most grief and took about four takes as everyone tried to get the last clap in to claim the glory. Each one was more drawn out than an Oscar winning death scene.

Anyway, it’s great to see what a quarter of an hour of impromptu silliness can do for team morale. Next week we’re hoping someone needs mocap.

This is what is wrong with society today

There is nothing that gets me more irate than the legal system gone mad. Particularly the American one.

Guitar makers Gibson are suing Activision over their Guitar Hero series because it infringes their patent for simulating a musical performance. What makes this even crazier is that they have been official partners of the brand since July of last year so it could have hardly gone unnoticed. 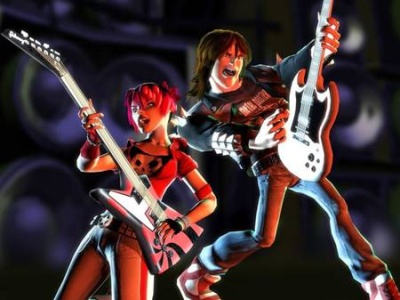 I can understand the need for patents when it comes to securing your rights over technical and highly skilled pieces of technology or research, but but when it comes to such generic filings I throw my hands high and wail in despair. Such a catch-all statement is one step away from a patent patenting patents.

With the precedence set, is Sony now going to be sued for Sing Star, is EA next for its Rock Band series or, more importantly, am I going to get done next time I use my shower gel as an impromptu microphone whilst in the shower?

I can only hope the judge shows common sense and throws it out.