There are a clear subset of games which I can easily lose my wife to. Zuma is one, Zoo Keeper another and in recent weeks I can now add Peggle to that list.

Peggle is a cross between the pachinko machines of Japan and bagatelle. Faced with a board full of pegs and armed with a limited number of balls, the aim is to clear a batch of designated pegs by bouncing, cannoning and ricocheting your balls off them. When the ball falls off the screen the pegs that you’ve hit will disappear and your task continues until you run out of pegs (good) or run out of balls (bad). 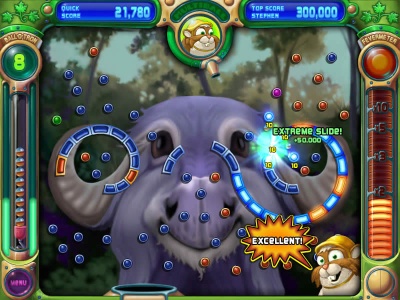 Whilst this may sound like a game lacking in extravagance, Peggle then wraps it all up in sickly sweet colours and sprinkles it with doe-eyed characters. Quite how a unicorn sporting an inane grin fits into a suped up bagatelle I’m not entirely certain. Looking at my own bagatelle it’s hard to imagine dousing it in florescent shades and associating it with mythical beasts, and this is where a many of the more cynical consumers are likely to be lost. Out of my circle of gaming friends many have said that they just can’t get past the look of Peggle.

What Peggle offers these people is an opportunity to rethink their stance very early on. Complete a level successfully and out of nowhere Ode to Joy pipes up, fireworks spark from your ball and rainbows blossom at the bottom of the screen. The sheer ridiculousness of the reward and its contrast to the sedate nature of play is both super pleasing and a revelation. At this point you begin to understand what Peggle truly is: a game that never takes itself seriously. It stops being a cuter-than-cute arcade game and unmasks itself as a collection of elements lashed together with the sole aim of making a silly and addictive time sink. If you can relax into that then Peggle will just keep on giving.

I found there a childlike sense of pleasure from seeing the balls bounce and ping around the pegs, and every new board was readily embraced to keep that feeling going.

There are dozens of boards to play and each batch has its own theme. Their challenge ramps up throughout and so whilst the early garden styled levels bed players in, the later ones are heavy on awkward geometric shapes or moving scenery that test seasoned Pegglers. The hike in skill required to clear latter stages is evident. By the time a competent player has progressed through the main game, though, they will be attuned to the bounce and feel of the ball, enough to feel they can pull off the audacious shots needed. Just like a favourite pool table, you’ll know how the balls bounce and run and it’s just a case of lining up the initial shot.

With each theme also comes a mascot, ranging from aforementioned unicorn, named Bjorn, to a dragon going by the title Lord Cinderbottom. Although all launch the ball in exactly the same manner, they offer variety through powerups. The effectiveness of each may vary but all alter how a board can be approached, the most useful being a mystic owl who hones your shot to zen-like perfection. Other can activate multiballs, create pinball flippers or detonate any close by pegs. A lot can be down to personal taste but there is a reason why the cult of Mr Owl has sprung up in Cheltenham. 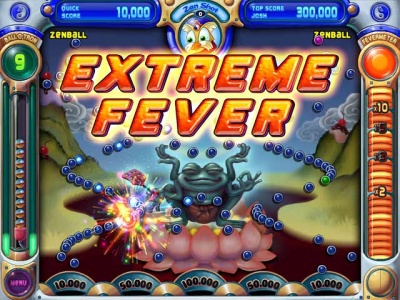 One aspect that I never considered before downloading Peggle was the social one. Armed with only a single television, Peggle has to be the game most likely to galvanise a room full of friends. Each ball is met with a chorus of “ooh”s and “ah”s and particularly crafty shots can have whole sofas on tenterhooks. Free balls and lucky bounces are serenaded with “good shot” whilst narrow misses have sympathies pouring in. Most might be down to physics and/or luck but you’ll take the support on board just as if everything after the initial bounce was down to a finely executed masterplan.

Once you’re done just hand the controller on over to the next player in the circle and the fun just keeps on giving. Pass-the-pad at its finest.

By all accounts, Peggle shouldn’t work. It’s a collection of seemingly random art assets combined with a game mechanic that ostensibly revolves around luck. And yet somehow this crazy mix works. Like so many simple concepts, its hooks can sink deep and everything from the ever rising pitch of the activated pegs to the constant positive reinforcement seems like a masterstroke. Above all, it’s about the search for the perfect shot. The one that even Mr Owl would be proud of.