Personally, I hate blogs that apologise for not pushing new content. Do or don’t, it’s up to you because if I’m interested in what you have to say I don’t mind how often you say it. I also feel it’s the first step along the line to the blog’s death.

This is why I’m not apologising for a lack of content recently, merely explaining the cause of this drought. At the moment I’m trying to divide my time between married life, a social life, drumming, my rekindled interest in Games Workshop and the always looming shadow that is work. All those are pulling me in different directions and the upshot of it all is that not only is my gaming time heavily reduced but also my time to write about my gaming time, or anything else for that matter.

Anyway, rest assured that I do intent to keep my keyboard skills up to scratch and do in fact have an interesting project on the horizon… just not right now, sorry.

What do you want from an online social space? I’m not talking about Facebook, Linked-In or Friends Reunited but one hosted on the console of your choice. If you had an arena where you and your friends could just log on and shape, what would it look like? I ask because I’ve recently downloaded PlayStation’s Home. Originally touted as a great social tool, it left me cold.

One of the many reasons for this was your avatar. Before entering the community you are dropped in a fitting room, a model staring back at you begging you to shape it in your own image. And I don’t mean “model” solely in a technical term, I mean the kind of person you see who is trying to flog you aftershave from the pages of a glossy magazine.

I can assure you that I’m no chiseled specimen and so crafting the default features into my own was actually quite painful. There are no pleasing caricatures to be had from the world of sliders and colour bars governing your form, ala Miis and Avatars, just something that will yo-yo between an abomination and a bad photo fit.

Sony have gone too realistic with their users. Fitting in with the PlayStation’s brand image, they have attempted to populate Home with a multitude of young and pretty twenty-somethings. It feels like an application you can be refused entry to because you aren’t wearing the right shoes. Hardly the feeling a fledgling community should exude.

True, mischief can be had with Avatars and Miis but you can also get away with just throwing something together and have something passable. The amount of time needed in Home to craft a passing resemblance to yourself is large, and even then it’s only you in a certain light. It’s the uncanny valley issue in all its glory.

Return to the Capital Wastelands

There is something joyous about being back in the Capital Wasteland. The release of Broken Steel has given me another excuse to return to Fallout 3 and although it may be a landscape carved from a nuclear holocaust, after a six month holiday it is the most beautiful gaming world there is.

The only reason that Bethesda’s sprawling RPG was initially put to one side was that after 50 hours playtime and with a building pile of unplayed releases piling up I felt that it would do me good to try something else. In that time the controls disappeared from my memory and so the first half-hour was spent figuring out what was what and sifting through my inventory to see exactly what was what. Vague memories of just where I had plundered certain items from came floating back: Lincoln rifles looted from the very heart of the Capital buildings; bobbleheads pulled from long closed vaults; and trinkets stolen from a thousand defeated foes. It was as if I had found a long lost box of knickknacks in the loft. 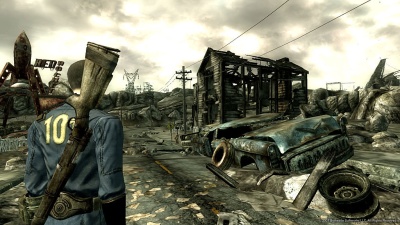 A big worry for me had always been whether Fallout would continue to be as good as I had made out. Whether it still deserved to be placed upon a pedestal. Those fears were put to one side only five minutes after leaving the safety of Megaton. Trying to map out those areas of the wasteland I had yet to tread, I headed off into the unknown only to find a children’s playground in the middle of no-where. In the centre of this was a climbing frame shaped like a space rocket, crafted into a seat. Or more exactly, a throne, for on it sat The King of Roaches, surrounded by dozens of his cockroach subjects. In a world thrown into chaos one sane man had decided that the only way he was going to survive was by donning a survival mask and setup a new kingdom in a desolate valley.

Upon approaching him to pay my respects he admittedly did pull out a minigun but that is neither here nor there as it is nuggets like this that keeps the game so interesting. Every inch of the game contains such an attention for detail that I just want to keep exploring. Already in my first play session I have unearthed a hidden military stockpile protected by dozens of barrels of nuclear waste, a slaver camp where they wish me to put explosive collars on new “recruits” and have seen off a mutant invasion from a small homestead. No wonder I’m knackered this morning.

The best games are those that are not only great the first time you play but also the second, third and fourth, too. Fallout was definitely no flash in the pan and with the level cap now pushed up to 30 it has managed to suck me back in.