When the Orange Box was first announced, I’m sure that many thought the draw would be the combined Half-Life 2 series. With the initial game, two episodes and very many hours of play it was hard to see Team Fortress 2 and Portal as anything other than bonus content. And then came the cake.

Portal is a strange beast in that it is an FPS puzzler. There are no enemies to shoot, only dimension shifting holes called, bizarrely enough, portals that you use these to get around the lab you are scurrying around within. 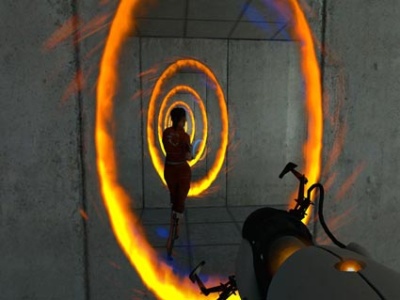 Where ever you shoot a pair of portals, entering one will see you exit the other. At its simplest this can be used to cross rooms very quickly but then take into account that your take your direction and momentum with you as you defy time and space and an interesting set of puzzles unfold.

All sorts of strange room arrangements present themselves that will see you hurling yourself hundreds of metres into the air, persuading energy balls to return to their casing and causing disturbingly maternal gun turrets to stop shooting you.

Portal’s originality is was what got me excited about this game. It’s all down to the way you can walk around the box, poking and trying things until the ultimate solution presents itself – and when it does you can feel like a god in later levels.

Of course, if you’re tired of puzzling you could just make your girlfriend motion sick by creating an infinite loop of portals and hurling yourself, or any Cube you may have to hand, into them.

It is not only the challenge and level design that is worthy of note, though; Valve have managed to take a puzzle game and create a humorous, intelligent narrative around it all that spins Portal within the Half Life universe which will make you laugh out loud on more than one occasion. Please, listen to your guiding voice throughout and your experience will be heightened.

There is so much to love about Portal but also so much to spoil. So, trust me and if you haven’t played it, play it. If only for the final song.