Four days on and I’ve now got a fair appreciation of Mario Kart under my belt. I’ve blasted through all the cups unlocking as many tracks as possible, dabbled in some local player and have only been stopped from going online by the fracious relationship between my Wii and my router.

First thing’s first, the wheel that comes packed in with the game. Basically, you clip your Wii-mote in a giant plastic disc and act as though you were driving a car. 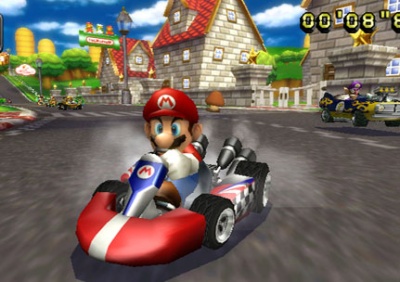 This wheel, however, can only get you so far. True, it’s not bad, but with less precision, heavy under-steer and requiring an ungainly shake every time you want to do a trick it is not good, either. I tried for an hour with the wheel and whilst it was alright and generally fun I found I had far better results and accuracy when plugging in my faithful Wavebird.

Control issues aside, although they should always be noted on the Wii, it is a good solid game. Single player as ever is a means to an ends when it comes to unlockable drivers and tracks, and it is the multiplayer where things take off as you battle back and forth, exchanging red shells with the evil cackles that only friends can let forth.

There’s a nice selection of tracks, a variety of karts but I really must say it’s lacking a certain spark. The trick system is a nice addition, the bikes are alright and the game as a whole may be hovering around the 8/10 mark in my head – and so well worth picking up – but it is almost like GTA to me: I expect it to be “good” but when it turns out it’s not to be “great” I feel slightly deflated.

Mario Kart for the Wii still has a lot of play time left for me to squeeze out of it, but come the checkered flag it is the SNES version that still places first for me.