In short, it’s good. It’s very good. Still too early to say whether it lives up to the stream of 10/10s that it has been receiving, but it’s definitely on course.

The issue explaining quite why it’s on course is, however, hard, due to the sheer scale of GTA IV; in just a few short hours I have already played pool, darts and bowling, been on several dates, had some warm coffee, driven over 50 miles, watched trash telly, tried to derail a train, have helicopters gun me down, been beaten up by several tramps, caused a seventeen car pileup, taken down a local boss who lived across the road from me, located the strip club, pulled over in a lay-by to listen to talk radio and have only just found the internet. I’m just glad I’m not doing one of my 365 word reviews on this thing. 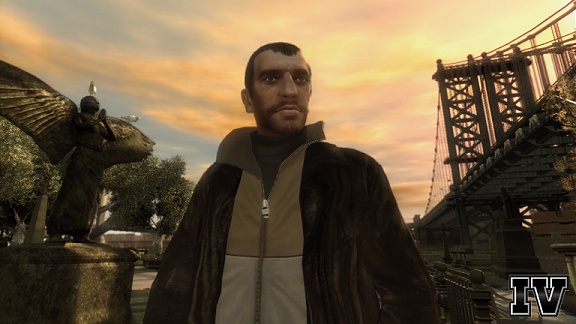 What first struck me about the game was simply how amazing everything looked. Previous GTAs have set themselves up as almost quantity over quality, where you could have your free-roaming city but it would be made out of comparatively low quality materials, something that was down to the Renderware engine of old. Here, though, everything is crisp and detailed, with an interesting almost painted look surrounding objects in the middle-distance. I can guarantee that on more than one occasion, usually when passing a high vantage point, you’ll look in awe at the cityscape presented in front of you.

Away from the visuals, Rockstar’s previous release Bully has had a definite influence on the game. The story seems a definite step up from previous instalments and the main protagonist has enough depth and personality for you to empathise with him. True, he’s still capable of going on a kill crazy rampage, but he’s infinitely more human than the hollow shells you played in GTA III and Vice City, with the game as a whole benefiting from this as you immerse yourself in his world.

The opening cutscene sets things up perfectly and drops you as an immigrant of unknown origin into the heart of the American Dream and it’s not too long before you’re drawn in to the seedy underworld that can be found in Liberty City.

Most of your early tasks involve you trying your cousin’s cabs around and here those familiar with a series will notice the difference. No longer are the cars simply bricks with wheels lashed to the bottom, they operate on a completely physics based system. The upshot of this is that controlling early cars is hard and the resulting crashes even more spectacular; their shifting weight and momentum meaning cornering at speed is hard, but ultimately more satisfying, in my opinion.

The combat has received a welcome makeover as in recent years the “clones” have been making a mockery of the original GTA control scheme, with both Saints Row and Crackdown having infinitely better setups. At this early stage, a lot of the problems seem to have been addressed and taking others in no longer a teeth grinding frustration. Aiming seems far smoother, with the choice of either locking on or free aim depending on how far depressed your trigger is. 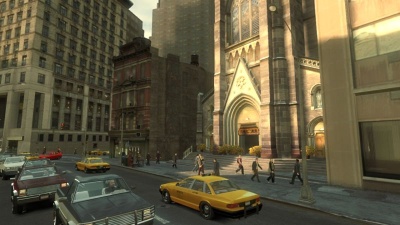 The freeform aspect of the game is obviously still there, just trying to steal a cop car is enough to let the sirens start blaring and your profile to be circulated amongst the cities Finest, but again I haven’t played long enough to unlock enough “toys” to truly take advantage just yet. With this play in mind, a welcome is addition is the new cover option, meaning gunfights can be more than just a spray and pray affair.

It isn’t all be about cars and guns for Niko, either. Socialising plays a large part in the game, to keep friends and contacts sweet whilst also giving you a chance to impress the opposite sex. These distractions from the main missions allow you to take your associates to various spots around the city to take part in some well fleshed out mini-games or cutscenes, the latter being represented by a cabaret with an incredibly roster of acts. The sheer quantity of shows available is testament to the amount that Rockstar invests in every single activity in the game.

The only thing that it’s missing is Agility Orbs.