Considering the critical response given so far to Grand Theft Auto IV, it seems best that a retrospective review should start out considering that it is a ten out of ten as opposed to the more traditional five. I like to think that all games start out as decidedly average and then work their way up (or down) from there, but with the universal praise it seems better to work backwards in this case.

Let us assume that everything about the game is as good as it is currently going to get. The shooting is phenomenal; the driving is a joy to behold; and the missions dished out to you have been conceived by the finest minds in Scotland.

Can anyone who has played GTA for any length of time really say that this is the case? 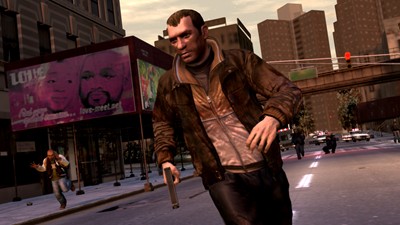 As ever, Rockstar’s monolithic franchise tries to do everything under the sun and to a competent standard but rarely succeeds in doing any one thing to a high level; a jack of all trades master or none. This has always been the case and although all aspects have been improved since the last generation, all still grate in so many ways that I can’t ignore them given their importance in the game.

Gunfight at the OK coral

Gunplay has always been questionable and although we now get the bonus of free-aim and a cover system within the revamped Liberty City, it still falls far short of reliable. With an auto-aim system that has a tendency to select corpses as a threat and a reticule that likes to unexpectedly shifts position when you fire out from cover, it’s almost as if getting the bullets to hit your target is part of the built in difficulty level.

When your guns are however behaving themselves, everyone bar the highest level of police seems very easy to drop, with the positioning of your soon-to-be-victims being the bulk of the challenge. They’ll intelligently employ the cover system against you, but everything is just a waiting game before they pop out or run hopelessly towards you.

As the game progresses you’ll find yourself in a rhythm when it comes to shoot out. Being in the open is a recipe for death so grab yourself some cover and wait; “stop and pop,” as someone once said. You will never be flanked or even in danger of being surrounded so it’s more about patience and making sure you have a large supply of ammo rather than free-form combat.

Your mission, if you choose to accept it…

For the first couple of hours I wondered what I had signed up to; Roman’s Taxi company seemed to have spread out and enveloped a large portion of the game and I should have heeded it as a warning for what was to come.

A lot of the imagination and variety of the missions seen in GTA III, Vice City and San Andreas seems to have deserted IV. There are a couple of interesting escapades involving a bank heist, I’ll give it that, but on the majority of runs I was sent from point A to point B to either protect C, kill D or to drop E off. By the end, I didn’t given an F about any of it. 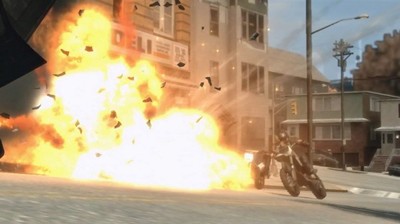 Where were the adventures where you took control of helicopter gunship’s cannon whilst your partner in crime flew through downtown for you, or how about when you were on a bike being chased by a truck down a series of drainage ditches? This new realistic Liberty City and straighter main character seems to have taken the inventive edge off of the possibilities.

Are you sitting comfortably?

Part of the reason I was really looking forward to GTA was Bully. There the story writing seemed to try and focus on characters and not just the “little guy pushing for top spot” that is a given.

To begin with in GTA, Nikko appeared to be a fully fleshed out man with a dark, war torn past and an unshakable loyalty towards friends and family. One early cutscenes shows him talking to a gangsters wife about the evils of his past and I really felt that they had nailed a believable and deep character.

Roll the game forward a couple of acts and despite his love of loyalty still being high on his agenda, it seems his main motivation is money and he will kill anyone for it. True, he keeps mentioning he wants to “find somebody” but this is played out and if there’s a pay cheque there for him too he’s not going to argue.

When this realisation hit, I didn’t care for Nikko any more. The odd mission where he showed his human side drew me back in a little but it is very hard to empathise with such a man, something that I believe is important if a game truly strives to be a masterpiece and recognised beyond the realm of gamers.

I know a shortcut

Driving is the standout aspect of the game and so I shall be positive, at least here. The actual mechanics are far heavier and more realistic than we’ve seen before in open world games and so take quite a while to get used to. To begin with you’ll find your car lurching through the city, its weight shifting unnervingly causing you to spin out on most corners you’ll take above 40 mph, but as time went by you should find yourself embracing this focus.

Car chases become an exciting prospect knowing that you have to consider your route and each bend found on it. Driving like a maniac will be of no assistance to anyone as telegraph poles and trees are permanently on standby to cut short your escape. There is a true art form in maneuvering your ride through the city and its backstreets to safety that is as about as cinematic and as satisfying as you can get. 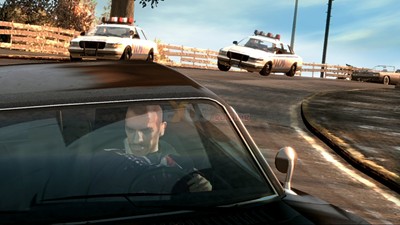 The way the police operate plays well into this, too, with the aim to lose them and then escape their cordon undetected. There is the thrill of the chase and the satisfying smirk of knowing that you’ve out witted Liberty City’s finest, if done correctly. Highlight of which is when I lost my pursuers, swapped cars and then sat in my new ride as they drove inches past my bumper without realising it was me. I then drove at the speed limit out of their search area and was away.

This was never meant as a boot into the game, more of a quick slap across the face to see if I’m the only one thinking like this.

Grand Theft Auto is obviously more than the sum of its parts. Combining all these elements together with Rockstar’s spark for satire and the knowledge of what gamers want produces an amazing game and there’s no denying that. Despite all my frustration at the camera, the shooting and the in-game socialising, I sunk almost forty hours into this and do not regret it.

It’s an amazing feat they have pulled off creating such a deep and varied world, but I don’t think that world should be confused with the game itself.