The concept of Too Human is simple: Cyber vikings are at war with a breed of mechanised humans on one front and robotic elves on another. Solution? Beat them all around the face with a large hammer until they behave.

In this third-person, action RPG, you take the reigns of Baulder, son of Odin and the one tasked with dishing out said beatings. Using only a single stick for basic attacks, you smash and crash your way through dungeons, setting the world to rights, collecting loot as you go.

This approach to combat is initially engaging. Sliding from one batch of foes to the next is simple and by incorporating double taps and the odd button press, powerful combos open up. The challenge comes from the enemies you face in any single encounter; trolls have area-effect attacks, goblins prefer melees, whilst spiders like ranged weapons. You approach each skirmish assessing what to remove first to make your life as easy, and as long, as possible. 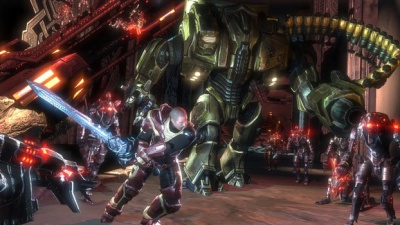 However, death bears no real penalty. Bar an irritating cutscene, you respawn back in the midst of battle as if nothing had happened. At times I would just wade in regardless, knowing that death awaited me but at least I’d whittle the opponents down to make my next life easier.

Combat eventually grows tired, with only end of level bosses offering true variety. The minimal RPG elements that exist only offer to enhance your existing abilities rather than unlock new, distinctive attacks. Even with five available classes, the only thing different is your starting stats and not styles.

With dull and repetitive environments, the only thing to keep most people going is the Diablo-esque attraction for collection loot and by the end of the first level you’ll have so many shoes that even Imelda Marcos would be put to shame.

The annoying thing is that it shouldn’t have like this; the story of humanity with cyborg implants and it’s consequences, the trimmed down co-op, the RPG-lite and the repetitive gameplay, they all had potential but nothing ever clicked.

With another two in the trilogy still to come we had better hope for a fresh start – I couldn’t do that again.