So I’m a few days into FIFA 09 now and I’ve had a chance to – excuse the pun – tackle a lot of what it has to offer and so far I am not regretting my switch from Pro Evo one bit.

From the traditional season through to the Be a Pro mode and on to Live multiplayer I can’t say I really have any complaints. Players are responsive, play is fluid and the game is another step in the series’ movement away from the high-scoring pinball football of its past.

There are moment when I forget myself and think I’m in a FIFA from a decade ago, trying to charge my way through defences or shoot from 30 yards on certain angle but never to any joy. 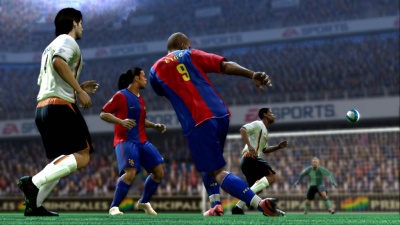 The biggest challenge I’ve found myself facing so far is that of the Be a Pro mode. I’ve chosen to be a midfielder in the current Spurs team and it’s proving to be a bit of a slog. Whilst I can track back and help out on the defensive side, the rest of my team seem unable to score or even willing to pull the trigger in front of goal. With my limited forays upfront and my lack of skill when faced with the onion bag I don’t think we’re going to push for the league title this season as so far out of seven games we’ve drawn six, won one with a debious penalty and only scored another solitary goal from open play.

My traditional season is fairing better with my team in a European spot. I still struggle in front of goal but this version of FIFA brings out what I loved about the Pro Evos of the past: it allows you to string together some swift, cutting play that you’ll want to watch again and again and again, or it’ll sit you back and let you lump the ball forward all day long for a lofty centre forward. What it won’t do is make it easy when under pressure so you do really need some space to make a difference, just like in the real game.