After Peter Molyneux started rating his own game before it had been launched, I began having a few worries that we were going down the route that Dennis Dyack took with Too Human. Both developers have been known to occassionally talk a little too much but the difference here is that Fable II actually seems to be worthy of your attention.

Lionhead’s new title really has its hooks in me and I’m currently running around Albion raising a family, setting up a thriving business portfolio and occassionally even finding the time to go and bash some fat goblins over the head. If you’re looking for a box quote: it’s like Oblivion but with character.

That’s true, too. As great a feat as Oblivion was, I always felt it was always a little flat. Fable may be smaller in terms of scale but the game’s softer, caricatured style can be equally both more friendly and much darker, leading to a more engaging world. 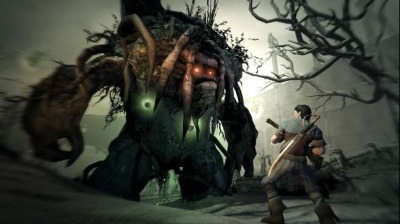 If you’ve played the first game then the feel is very similar but with one big positive in that the combat has been reworked and streamlined. Very much like Force Unleashed, you have three different weapons linked to three different buttons allowing you to easily swap to a fighting style that is suitable to your situation without having to learn countless combos. Although effectively one-button combat, it never feels overly limited as you have the option to pull many magical spells from your bag to liven things up should you so wish – making a horde of zombies rise and do your bidding is always useful.

For me, the sign of a good game is one where you keep getting distracted from what you originally intended to be doing. Older GTAs have had that and so does Fable as my march towards the next quests gets put on the “to do” list as an interesting path takes my attention, which then leads to a new village to explore, which leads to new jobs, and the job to a different quest, and is that an attractive maiden over there….where was I?

The one utter disappointment, though, is co-op as it is fundamentally broken. At any point you can jump into a friend’s game. This may sound cracking but when you do jump in you are playing a nameless henchmen and not your hero, you are constrained to their camera view making for extremely restrictive movement and you cannot interact with any of the characters or shops. It is frustrating and utterly unproductive as you cannot do anything without coordinating movements with the main player. Any one of those on their own would prove annoying but the mere fact you cannot move around freely means that I am never touching co-op again, usually a feature that elevates a title in my eyes.

That aside, Molynuex’s score may be right, it’s probably why he marked himself down.