Back at university I used to play a reasonable amount of Real Time Strategy (RTS) games. Take five boys in one house, a few copies of Command & Conquer and a network held together by duct-tape and you’d keep me quiet for hours. Since then, unfortunately, I’ve moved further and further away from PC gaming. Consoles are now my platform of choice and the RTS genre doesn’t have a reputation of porting to them well.

Several have tried to rectify this by building a console version from the ground up rather than trying to shoehorn PC controls onto a joypad. Lord of the Rings: Battle for Middle Earth did a reasonable job but still everything seemed overly complex and fiddly within its menu structure. Where Halo Wars works for me is the simplicity at which its build and actions menu operate with. There are no multiple depths, whenever you select a menu you a present with a single circular layout where all options are visible. There is no drilling down to unlock super secret powers, everything is a stick push and button press away. 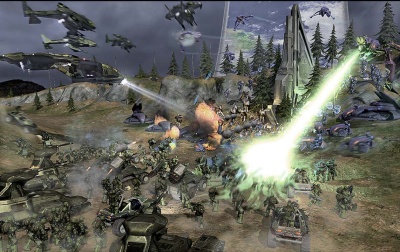 Obviously the amount of units and options available have been kept lean to fit within this structure, but as the UNSC and Covenant forces are already well established I don’t believe this is too its detriment. Adding too many outlandish crafts would have scuppered Wars’ connection with the greater Halo universe. What this aids is a rock-paper-scissor style battle where certain troops/vehicles/aircraft are better suited to taking down other troops/vehicles/aircraft than others. Should you pick the wrong one you won’t have to go through a giant tech tree to rectify your mistake as there are only three or four unit types in each bracket.

Some may have misgivings about being limited to a certain number of buildings, which in turn limits your resource gathering and unit production. Each base only has a certain number of slots and players must choose how to fill them wisely as they only way to get more is to take over another base. It can seem that at times your army does seem dramatically small compared to what you need for the task in hand but at the moment I’m putting that down to my inexperience.

My main issue with Halo Wars was with the actual movement around the battlefield. The default settings seem far to twitchy and aiming to select a single unit can be troublesome. The solution seems to have been to tone down the sensitivity in the menus but compared to the spot on handling of the original Halo that experience was disappointing.

In the time I’ve spent in the alpha and with the now released demo I’ve enjoyed myself and as a self-confessed Halo fanboy I’ve been surprised at the new units. They’ve managed to make up the numbers but without breaking the conventions of either faction; Covenant Locusts are hybrid between Scarabs and Wraiths whilst the UNSC heavy airsupport look as though Pelicans have been on the Weight Gain 3000. I do get the feeling this isn’t going to set the RTS world alight and that the Koreans won’t be discarding their Starcraft discs just yet, but Halo Wars does seems a solid if not exceptional RTS that should be worthy of most 360 owner’s time. Even if they can’t tell you Master Chief’s first name.