Taking Rock Band to the next level

I’ve always affectionately classed the drums bundled with Rock Band and Guitar Hero as “Fisher Price.” No matter how hard you try there’s no way you can truly pull off the air of a true musican when doubled up over a half-sized-kit which is made mostly from plastic. They have sparked something within me, though, and since their release some six months ago I have been avidly beating away on them in the bid to become the next Phil Collins.

On Friday, that dream came a step closer as the lovely people at Thomann.de kindly delivered to work a complete e-drum kit. Five large boxes containing dozens of smaller boxes have never made a man so happy.

It may be electronic and operate through my headphones to spare our neighbours, but it’s no lightweight. Three hours were spent assembling it on Saturday morning and a further two just to try and get it to fit discretely into our living room. We failed at the “discrete” portion of the mission but the bunnies are enjoying their new climbing frame. 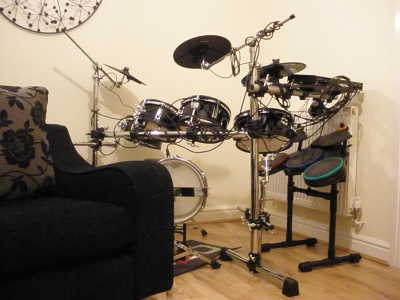 In just these few short days it’s fair to say that I have fallen in love with my new shiny toy. With it so accessible it’s nice just to nip and have a bang and crash when you have a spare few minutes, as long as Ali isn’t watching Come Dine With Me at the same time. Where it truly excels, though, is its ability to be wired into Rock Band. Take the MIDI out from your sound module, plug it into the relevant port on your Guitar Hero drum kit, tweak the note outputs and within five minutes you have a novelty controller that puts Steel Battalion to shame.

Going from a very compact setup to the range offered on by the e-drums is quite a shock. I’m just so used to reaching just a couple of inches that at first it was horrible. Anyone who plays games (or instruments) will know that after a while your muscle memory takes over. You don’t need to look where the X button is or where a certain string is on your guitar, you just know it. I’m slowly relearning the instinctive movements for Rock Band and with each progressing song the experience just gets better and better.

Whatever you may think about investing in such a ridiculous “toy” to go with gaming, I do think that the combination of Rock Band 2 and a full e-drum kit will help anyone with their drumming. On a basic level the whole point of those games are to play along in time, something quite critical for anyone armed with an instrument, but also because it has rhythm and fill trainers. Lurking in its depths are dozens and dozens of riffs and drum rolls for you to practise, giving you feedback on just where you’re missing the beat. It’s never going to replace music lessons but as a compliment to them it’s very beneficial.

Cards on the table, it still doesn’t beat a full acoustic kit. My first port of call whenever I get into work early is the music room but for a home environment I don’t think I could have done much better. The fact it can be linked with one of my favourite games of all time just makes it even shinier.

This entry was posted in Gaming, General