Here we go, the report I’ve been promising and that I’ve forced all my workmates to read:

Transatlantic flights are good for two things and two things only: giving your Nintendo handhelds a good airing and getting some heavy duty reading done. What they are not good for is your back, your sanity and your sense of time and space, but these are all inescapable evils when it comes to hopping over to San Diego for the celebration of popular arts that is Comic Con. 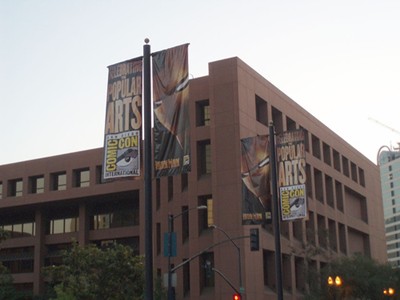 Comic Con is more than its title might suggest as it has grown from being a comic fan’s convention to an event that attracts numerous international toy manufacturers, Hollywood film studios and game developers, plus the more traditional comic labels that you’d expect to find. It is truly a multimedia event with something to attract pretty much anybody who cares to take an interest in the entertainment industry.Our mission

Justin and I had somehow managed to sneak into this party under the pretence of work and the pass that hung round our necks declaring us to be “Professional” was being very generous indeed. We had been chosen as the lucky pair who were to travel to California to host a panel discussing Viva Pinata and its position as a newly emerging franchise. The original concept of this was floated by Joshua Ortega, writer at MGS, with 4Kids backing us up to give more breadth to the discussion.

This position didn’t last too long, though, as 4Kids had to back out leaving Justin and I only a matter of days to prepare a talk on VP. Out went the old idea, in came PowerPoint and a hastily prepared history of Viva Pinata that showed where we’d come from and where we were going. Hopefully it would contain enough pretty and unseen images to keep both the young fans and those critical adults happy.

We weren’t worrying about this as we arrived, though; touching down on Friday meant we pretty much had 48 hours to take in the show before taking to the stage. 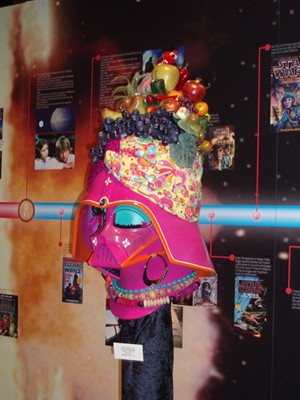 E3 are you listening?

My only previous experience with a show on this scale was the E3 of old, where giant stands battled against each other with neon lights and screaming speakers to attract those brave enough to scurry in amongst their midst. Comic Con was a breath of fresh air by comparison and, excluding puns about the air conditioning, it was accessible, welcoming and just a plain enjoyment to walk around.

Even though the entire show was packed, it didn’t feel like you had to wait too long to get anywhere or use your elbows too much to force your way through to see anything. The only exceptions to this rule were the lines that formed to grab the autographs – the big names that had turned up to pimp their wares, whether they be from TV, film or print. Apart from anything, there were hundreds of stalls and so there was plenty to entertain you as you waited for lines to subside.

Continuing the E3 comparison, Comic Con did actually feel like it had a Kentia Hall section. At each end of the convention centre it inhabited were rows and rows of stalls selling some very interesting (and odd) things. Apart from the usual comic merchandise of toys and DVDs, this area housed ornamental weaponry, publishing assistance for aspiring artists and many, many stalls offering help for all your cosplay needs. This latter section boasted some very intriguing garments and countless silly hats that could be seen time and time again throughout the crowds.

The centre of the hall was given over to the big names of the industry, with Mattel, Hasbro, Lego, Marvel and DC all standing tall as you entered. The former trio showed off the latest cross-over promotional figures with the brands of the moment (Transformers, Star Wars, Batman, etc) and, quite frankly, I was amazed at how many times you can truss up Batman in different costumes and shapes to sell him to consumers.

Marvel was heavily promoting the forthcoming Iron Man movie and, along with DC, was thick with queues for autographs from their current crop of writers and artists.

In between the heart of the show and the weirder stalls on its outskirts lay stalls that held most interest to me: here were the smaller (compared to Marvel, anyway) and independent publishers and producers.

Having only recently been introduced to comics by my little brother, the entire Con left me a little taken aback by the sheer quantity of material that was available. Luckily Justin knows his stuff and was able to clue me in on what was going on, who certain people scrawling their name on bits of paper were and what I should be looking out for.

Superhero comics have never grabbed me, with only a couple of exceptions, and it was in this fringe area where I found the publications that I preferred. Away from those who chose to wear capes and skin-tight suits were the edgy British writers; silent and beautiful short stories; colourful political thrillers; gritty dramas; and, of course, zombies. 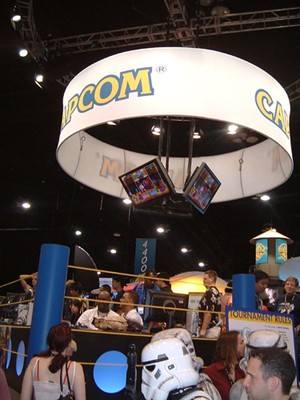 The further from the centre we went the more the stalls were manned by those directly involved in the production of the comics. The ability to chat with the creators and writers was an appealing aspect of the show and a chance for you to flick through their material, plus, in return, a way for them to peddle their wares directly to you.

I have to say, I ended up stocking up quite a bit on reading material during the weekend. Although, compared to what I wanted to take back, I was quite restrained.

The evening provided their fair share of entertainment, too, with the Eisner Awards (Comic’s Oscars) and the masquerade both taking place whilst we were there. Not wanting to be restricted to the evening, the masquerade readily spilled across each day of the show as Con-goers weren’t afraid to dress up whilst browsing the aisles.

Wherever young people with disposable income gather you can guarantee video games are not going to be far away and Sony, Capcom, Sierra and others were all present in San Diego to take advantage of the crowd. Some of what was on show was material linked to the show, like the latest Conan or City of Heroes, but mostly they were willing to demo anything that was in a fit state to be in the hands of the public.

Sony’s presence was scattered between three stalls: demonstrating blu-ray, showing off the PS3 and a dedicated Eye of the Beholder stand. Capcom also showed off their latest titles, including RE5 and Zach & Wiki, but trumped the others by having their area dominated by a boxing ring where contests were held.

By far the most relevant exhibitor for Rare was The Behemoth. Despite only, and this isn’t meant disparagingly, having Alien Hominid and Castle Crashers to their name, they managed to have a constantly packed stand with display pods and more merchandise that seemed possible. 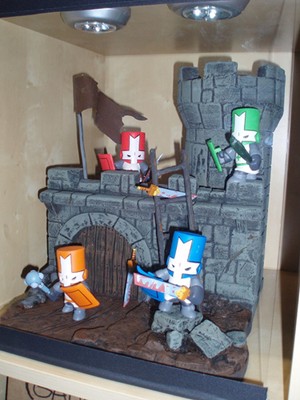 Seeing the success of this made us think “why don’t we have a presence here?” Half the companies were there simply for self-promotion rather than direct sales but I think we could do a pretty good trade given the right backing. Every stand with a console on it had great traffic, so imagine if we set up a Jetpac tournament? Think of the promotional items we could conjure up with our IPs and I know for a fact that people really want posters of Ryan’s INTO THE PIXEL piñata image. This is something we should seriously consider attending in future years, especially if we can get some more comics/novels produced.

Rare’s only duties this year, though, were that of the panel. We had been to the Penny Arcade and Tomb Raider: The Animated Series (which shared some very interesting parallels with VP and its own cartoon) the day before, so we had prepared ourselves mentally for what to expect. However, placed on Kids Day during the death-throws of the show we realised we weren’t going to have too many people to entertain, meaning we were pleasantly surprised when thirty to forty people turned up to hear what we had to say. It would have been more but you just can’t help these things.

With Josh introducing us and Chris Kimmel joining us as an official MGS representative, we set about enthralling the crowd with tales of the early days of VP, how it started aimed at mobile phones and PDAs and how it ended up settling at home on the 360. The most interesting part of the talk was explaining how the actual piñata idea came together and how Ryan developed it into what you see now, which was no mean feat seeing the oodles of drawing that had hit the cutting room floor; the lost piñatas and helpers got particular admiration and the occasion odd look.

We touched upon the TV series, 4Kids and other current VP projects, but with no real representatives from any of them we didn’t go too deep into any of those topics and merely shamelessly plugged them.

Finally we got to our big announcement, that of Viva Pinata for the Nintendo DS; having never announced anything before it was quite an exciting moment. Everyone seemed impressed and it was even met with a ripple of applause as we showed a handful of screenshots, voiced-over by us waxing lyrical about its quality and appeal.

With our pack of slides exhausted, we took questions from the floor and the inevitable “my piñata has turned invisible” came up. All you can do in that situation is apologise and look sheepish.

Thankfully things brightened up after that as talk turned to DVDs and movies, possible sequels and even what colour your Dragonache was. We revealed our favourite piñatas and I may have also mentioned to the crowd that we had a hybrid of Killer Instinct and Blast Corps in the works, so someone better get started on that so as we don’t disappoint.

And just like that, it was over. We strolled back through the conventional hall, exhibitors packing up as we headed for the hotel and still meeting cosplayers on the way.

Overall, this a fantastic trip to be sent on. The panel was great and it was a pleasure to present our game in that way to the fans that did turn up, giving them some back story of the IP and fleshing out the fuzzier areas. Not only that, but the show itself was an eye-opener  in terms of what others are doing to promote their own brand and, more importantly, that we should be getting in on this act, too.

If we do manage to wrangle a spot at Comic Con 2008 I think you’ll find Justin and I heading the volunteers queue to man the stall. As it was, that was the end of Comic Con 2007 and I had another half-day in the air to level up my Geodude. 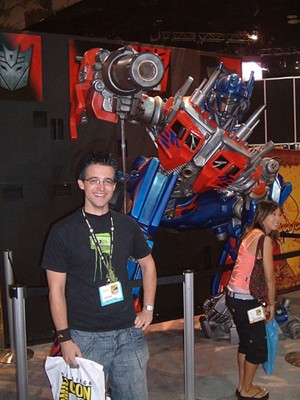