I believe that it’s only worth investing in a console if it does something different to the one that you have already. The success of the Wii possibly proves this as many have it a second console to complement a 360 or PS3. Having a PS3 to complement a 360, however, is slightly harder to justify; a quick glance from Joe Public and he could be forgiven in thinking that they’re just different coloured boxes offering marginally different flavours of cars, guns and guts.

On the whole it’s reasonably true, too. I never wanted a PlayStation solely for Killzone, Uncharted and Gran Tourismo as I already have Halo, Tomb Raider and Forza, thank you very much. Under closer examination they may be completely different games but ultimately they do did not offer the massive shift in experience that would have been required to make me rush out on launch day to secure a PS3. In my opinion, the strength of the PlayStation comes from the more art-house games that I never could have envisaged being launched on a Microsoft console. As previously mentioned, this is lead by Little Big Planet and reinforced by a great number of PlayStation Network games (Sony’s equivalent to Xbox Live Marketplace).

Favourite of those that I have tried so far is Pixel Junk Eden, a game that places you as a tiny shrimp-like creature in a very stylised, 2D garden. In a very similar way to firing a rocket in Worms, you launch yourself around the level, clinging to the plants that grow all around you and aiming to reach the higher points that hide your goal. You can only be launched so far, though, and further plants must be pollinated and grown to give you a framework to climb. 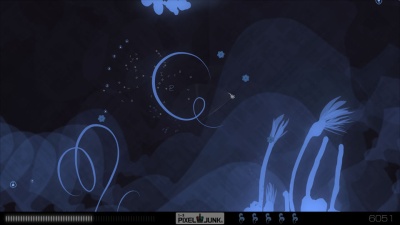 Like so many downloadable games, it’s a very simple concept – climb high, collect pollen, grow plants, climb higher – and tied in with a very distinguished art style. Pollinate a seed and as you move away the shoots with rise and loop skywards, swaying in the breeze. Clean, flourishing strokes paint the garden and it’s impossible to mistake its screenshots as being from anything else.

Despite the world’s simplicity, exploration is still your prime motivation as your goal is not reaveal to you. You know it’s somewhere “up there” and half the fun is swinging in between stems, grabbing pollen and putting further distance between you and terra firma in your bid to reach it. Thought is required, though, as with only a certain snapshot of the garden visible to you at any one time a misplaced jump could see you crashing unceremoniously back down to earth.

I’m still only a couple of gardens (read: “worlds”) in but I believe I already have Eden pigeon holed. It is a game that I could boot up and lose hours to or just to fill a ten minutes gap, but ultimately Eden will be put on when I just want to chill out. In the same way I can relax with Piñata, the more considered Mr Driller modes and Animal Crossing, it is there for when I want to crash on the couch and not get wound up by steroid enhanced space marines. Rez without the beat, if you will.